The rockslide and rock avalanche desposit Skredkallen is located on the island Vannøya, a large mountainous island on the outer coast of Troms. It contains spectacular large craggy mountains (up to 1000 m directly from sea level), white sandy beaches, exposed tundra, reindeer and even it’s own fjord! The island is accessed by ferry only, but is well worth a day or weekend visit from Tromsø. In my humble opinion, this is one good looking rockslide. The work presented here involved some Sherlock-style detective skills from UiT’s finest geomorphologists, geochronologists, Quaternary geologists and engineering geologists.

We discovered the Skredkallen rockslide by accident. Hanne-Kristin Paulsen, a PhD student in bedrock geology at the time, was researching faults and mineralisations of the West Troms Basement Complex on the island. She showed me some images of a rock avalanche deposit, asking how it should be mapped, and a new project was born! 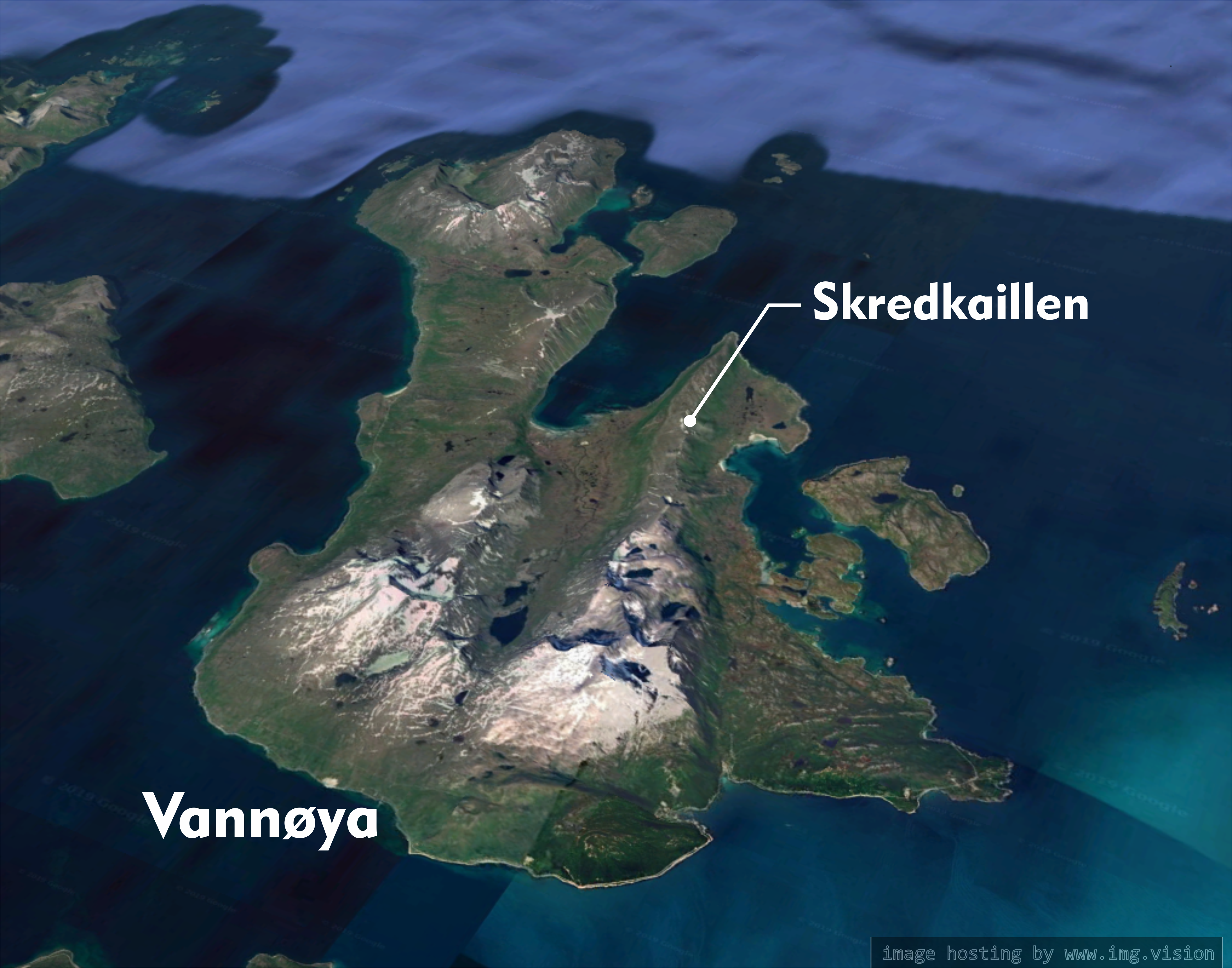 We traveled to Vannøya to check it out, which involves several hours of driving and around 2 hours hiking to reach the rockslide site. On the first visit i was joined by Steffen Bergh, structural geology extraordinaire from my department, but impossible to keep on task when he is in the field (being the West Troms Basement Complex is a bit like being a kid in a candy shop for him). After hours of stopping at outcropping shear zones and folds etc along the hiking path, I got a glimpse of the site before we needed to turn back to beat nightfall. It wasn’t just a large rock avalanche deposit but also an active rockslide above! 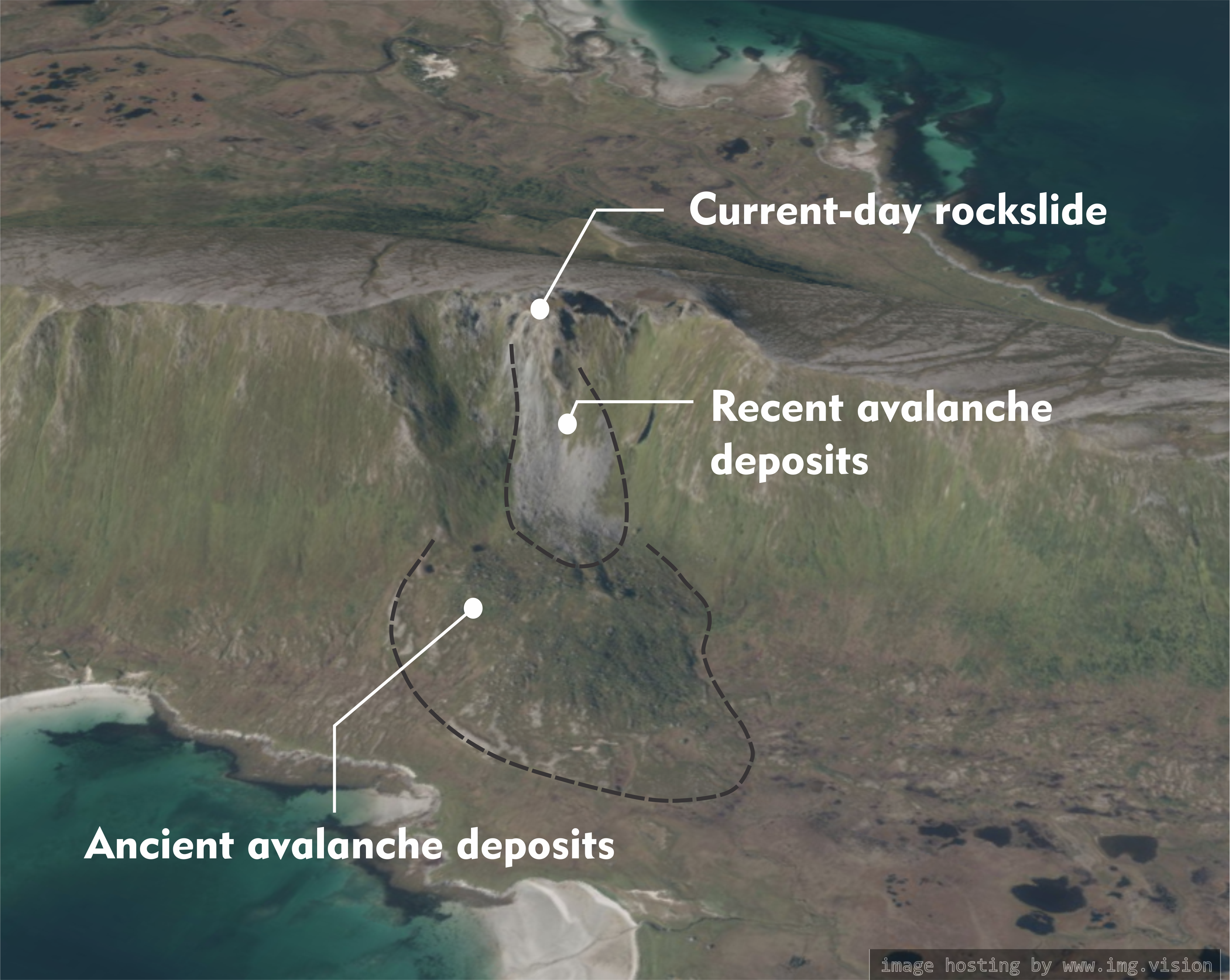 The following season masters students Leif Trønnes and Martin Mikkelsen began their masters theses on the topic- the former on the unstable rock slope, the latter on the deposit and timing relationships of the rock avalanche.

Martin and Leif had their work cut out for them. Vanna is a very exposed mountain, prone to every season in one day. They fought gales, storms, scrambles up steep slopes in the rain. They transported heavy coring equipment on sleds behind cross country skis. Leif lost a phone to a rock fracture. Perhaps the most challenging was transporting beer and other necessities from the car park along the trail to the cabin near the rock avalanche site. I contributed to the fracas somewhat by catching the wrong ferry on one field trip- we ended up spending quite a few hours on Reinøya, very much a different island. 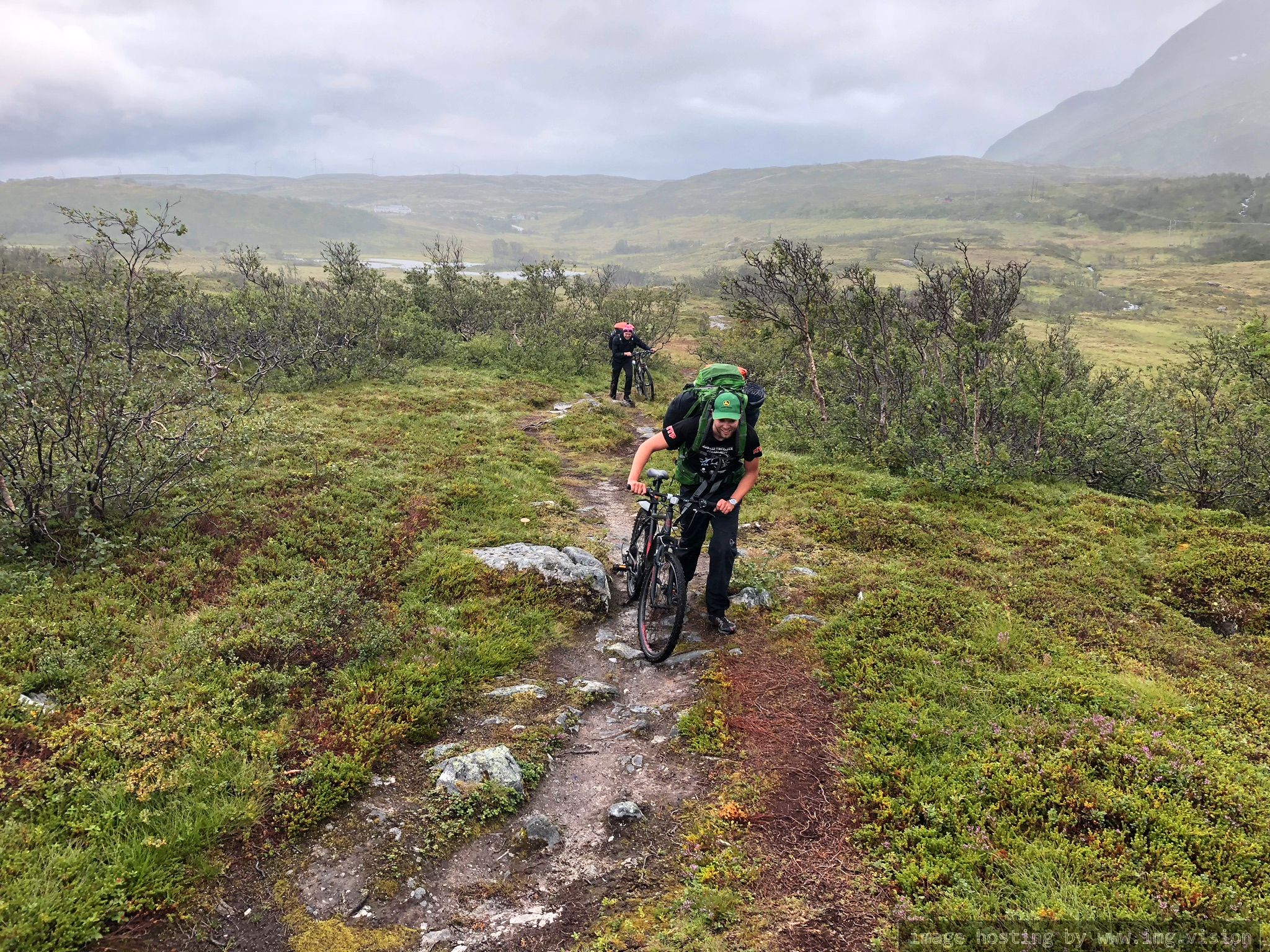 It payed off however. We had some really interesting findings which are now published open access in the journal Geomorphology: Evolution and temporal constraints of a multiphase postglacial rock slope failure. AND some great days out on the island!

Description of the site

The rockslide sits inside a ‘bite’ in the Laukvikfjellet ridegline, lying between 470 and 270 m asl on the east-facing slope. The sliding mass is offset across major backscarps and contains blocks and columns with flat terraces draped by a thin grassy veneer and delimited at the front by steep cliff faces. The volume of the rockslide was calculated to be 3 Mm3. It is moving downwards to the ENE at a rate of 5-10 mm/yr (measured on InSAR Norway). The sliding movement at Skredkallen is likely controlled by Foliation, joints, and aided by the deteriorated mylonite shear zones. 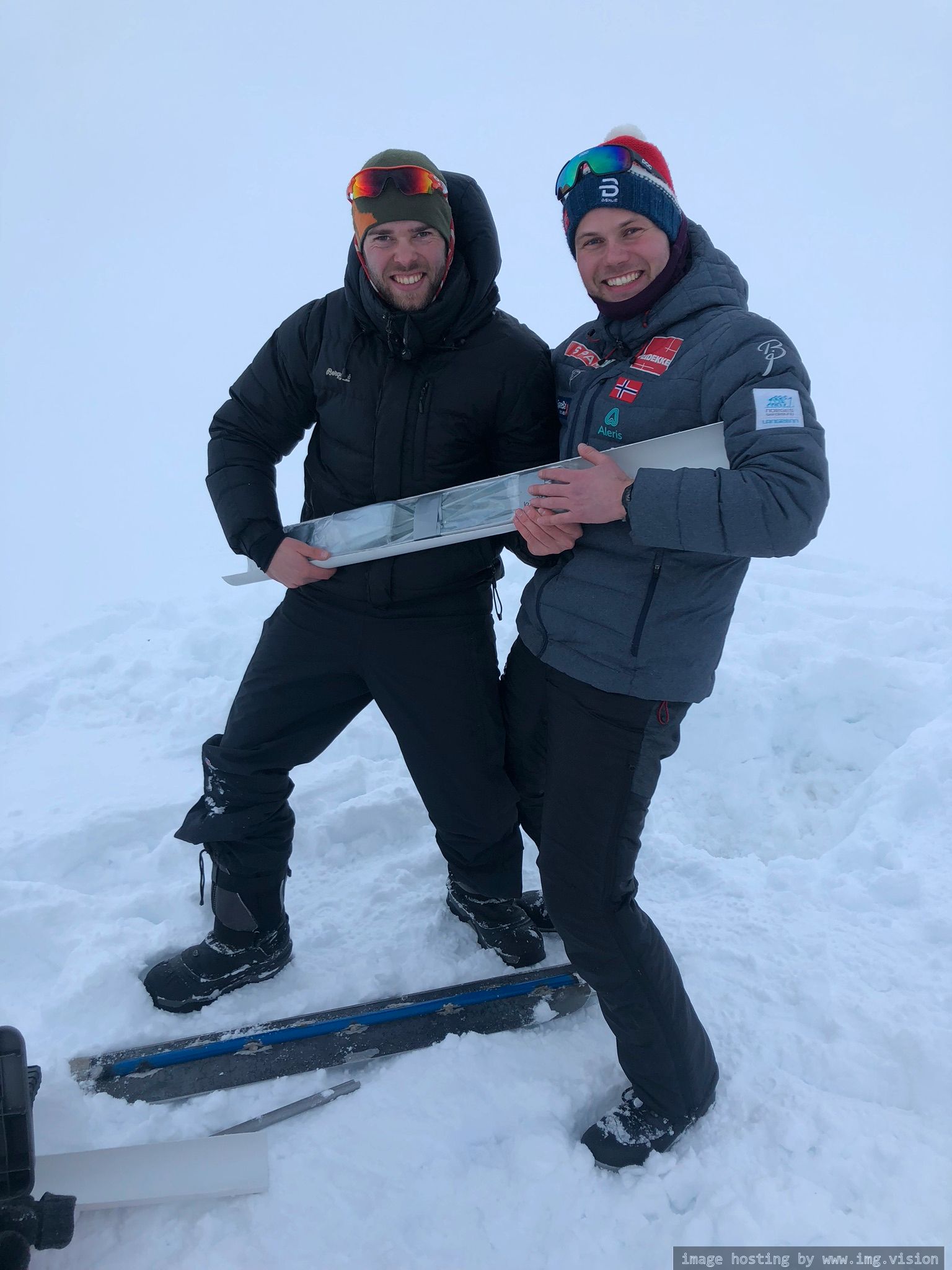 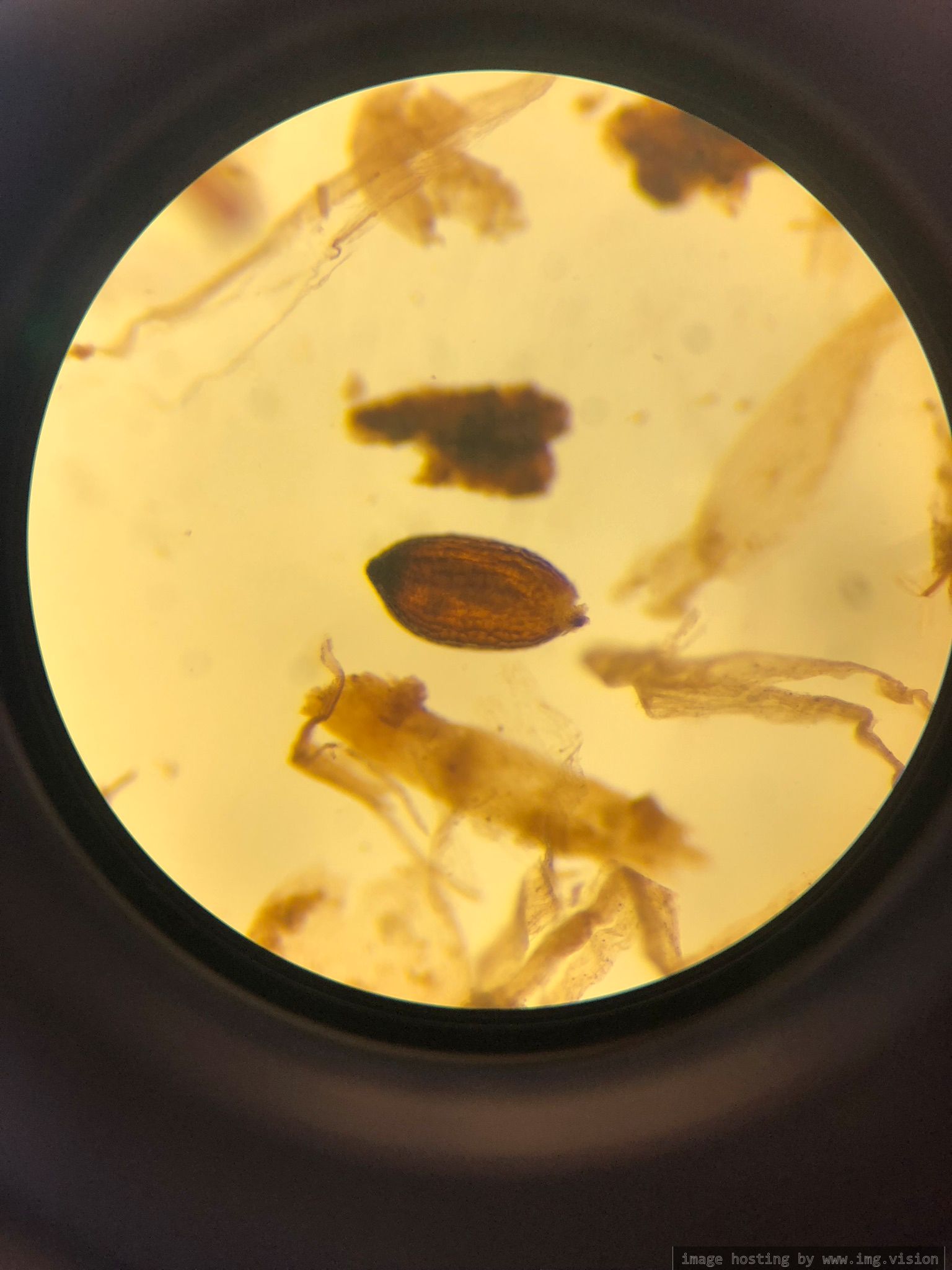 This line of evidence suggests this large rock avalanche event occurred after 15–14 cal. ka BP and prior to 12.2 cal. ka BP. This is in agreement with other Norwegian case studies suggesting that the peak of rock slope failure activity occurred soon after deglaciation, due to stress release by ice unloading and isostatic rebound. 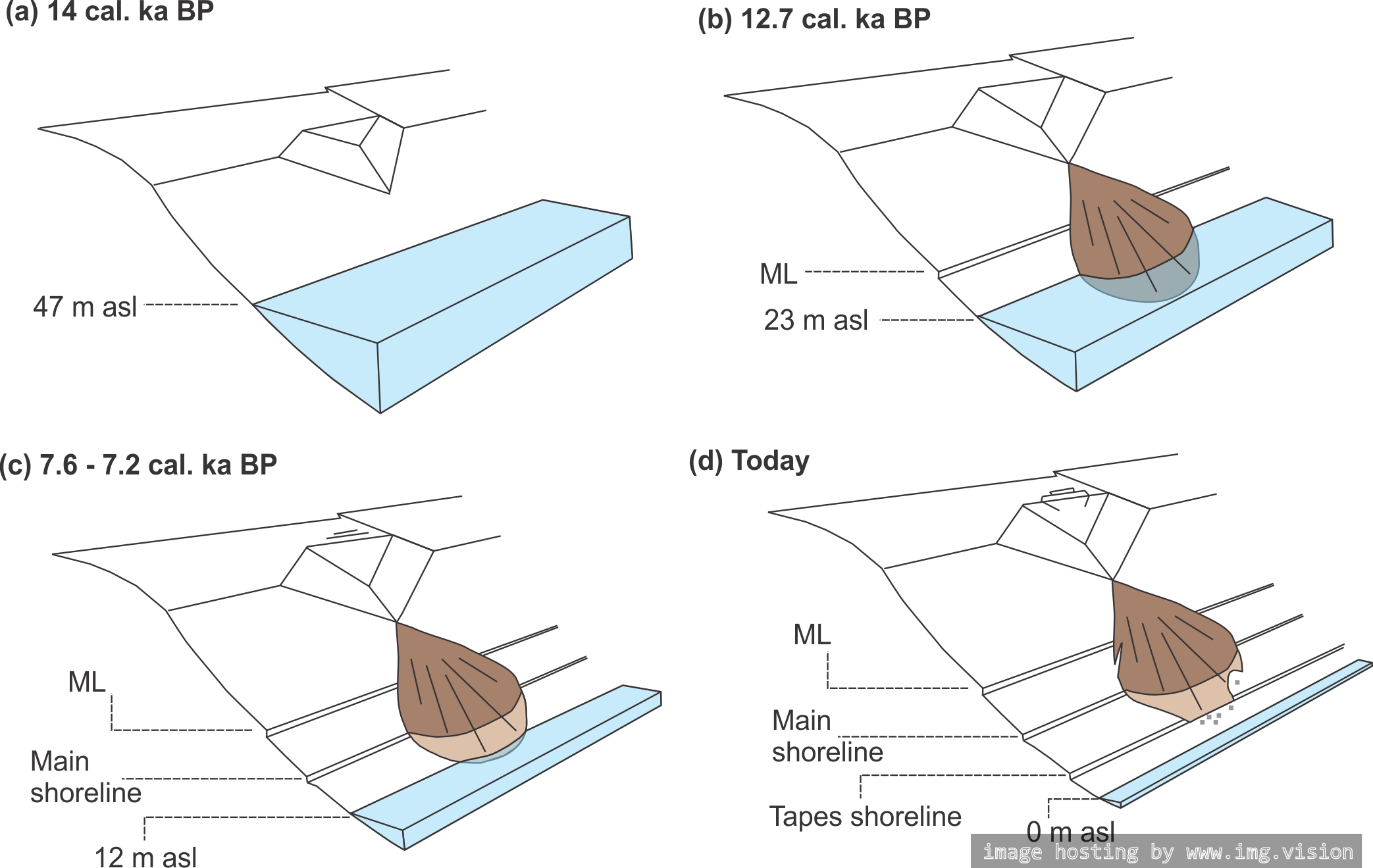 As we have established the timing of the avalanche prior to 12.2 cal. ka BP, we know the avalanche must have fallen into the sea (as it was relatively much higher at that time). What is now the exposed strandflat contained soft, wet marine sediments. As the large deposit moved downwards and into the sea, it would have picked up these soft sediments, ploughing them and mixing them with the deposit clasts to form the compact ridges of smooth rock avalanche material at the eastern and southern flanks of the lobe. Encountering ‘deformable substrates’ can increase mobility in some circumstances. This probably explains the long runout of the avalanche from the source near the rockslide.

The large time gap between the shorelines’ formation and age from the pond sediment dating may be because the pond formed later, or explained by the low sediment production on the somewhat barren island. Alternatively, avalanche activity may have been episodic,with a rock avalanche occurring after the first main event and providing the topography for the lake to form.